San Diego Home Sales website search offers all Coronado homes, condos and foreclosures for sale. You are able to get new property listings daily that meet your search criteria. 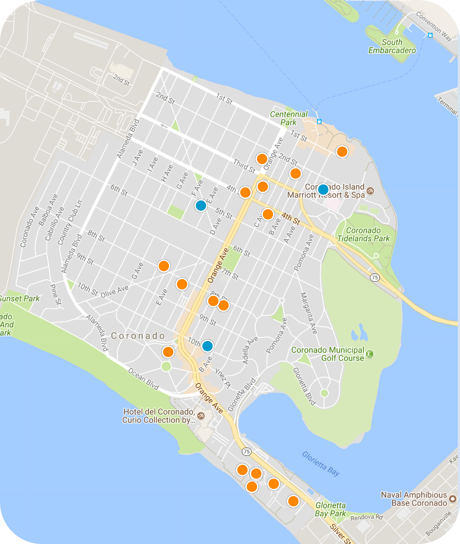 About fives miles outside of downtown San Diego lies Coronado, California, an affluent suburban community whose name means "the crowned one" in Spanish. The city, which was measured at the 2000 census to be home to a population of around 25,000, is rather affluent, with higher than average real estate prices. A 2007 estimate measured the median annual household income to be more than $91,000.

The community is also commonly referred to as Coronado Island because it lies on a peninsula that is connected back to the rest of San Diego County by a 10-mile isthmus known locally as the Silver Strand. The city officially has more than 32 square miles of area, of which about 8 square miles are water. The San Diego-Coronado Bridge was opened in 1969 to facilitate cross-island traffic.

The city's most famous attraction is the Hotel del Coronado, which was constructed in 1888 and is listed on the National Historic Landmark. It was featured in such films as "Some Like It Hot" and "The Stunt Man," and has had a number of world-famous visitors, from presidents and actors to athletes and musicians. Other attractions include two other resort hotels and a well developed downtown district full of shops, restaurants, cafes and bars. There are two theaters in the community, The Lamb's Players Theatre and the Coronado Playhouse. The city hosts a popular Fourth of July celebration, including a parade, 15K run, a swim, an arts festival, concerts and fireworks over the bay, as well as the Coronado Flower Show, held in the spring. July's annual Coronado Island Sports Fiesta features swimming, running races, diving competitions and more.

The Coronado community is served by the Coronado Unified School District, which includes a high school, a middle school and two elementary schools in this area. There are also two private schools, Sacred Heart Parish School and Christ Church Day School.

Coronado Real Estate Articles, Relocation & News Information
Loving Life in Coronado - Coronado is a very affluent area....
San Diego’s “Crowned” Jewel -  As a younger community where the...
Add Your Jewel to the Crown - Buying or Selling in Coronado - Selling a home in Coronado is typically...

Expansive 3 bedroom 2 bath unit! Move right in, use it as a rental, or create your perfect beach oasis. Coveted corner unit with stunning views of the bay, city skyline, ...

BRING ALL OFFERS. This wonderful and convenient split floor plan offers you two spacious private suites. This unit is the perfect canvas for your dream home on gorgeous C...