San Diego Home Sales website search offers all Pacific Beach homes, condos and foreclosures for sale. You are able to get new property listings daily that meet your search criteria. 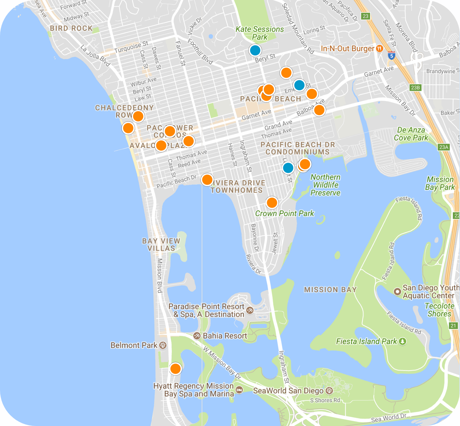 Pacific Beach, or "PB", as it is more commonly referred to, is the most popular beach destination in the City of San Diego, stretching along 3 miles of the Pacific Ocean from La Jolla to Mission Beach.

A neighborhood within the city of San Diego in Southern California, Pacific Beach sits about 10 miles northwest of downtown San Diego  bordered by La Jolla to the north, Mission Beach and Mission Bay to the south, Interstate 5 to the east and the Pacific Ocean to the west. The community is popular with college students, surfers and other young people and has a vibrant, lively night scene with several bars, restaurants and shops. Along the beach is Crystal Pier, which is open to the public and houses a hotel.

Pacific Beach was first developed near the end of the 19th century when many parts of Southern California were being heavily developed as more people began to move West. The population of the community reached 30,000 by the 1950s. In the 1960s, several new development projects were undertaken, including the construction of the Islandia, Vacation Village and Hilton hotels. This was also around the same time San Diego's famed Sea World opened just a few miles from Pacific Beach.