San Diego Home Sales website search offers all Vista homes, condos and foreclosures for sale. You are able to get new property listings daily that meet your search criteria on a set schedule. 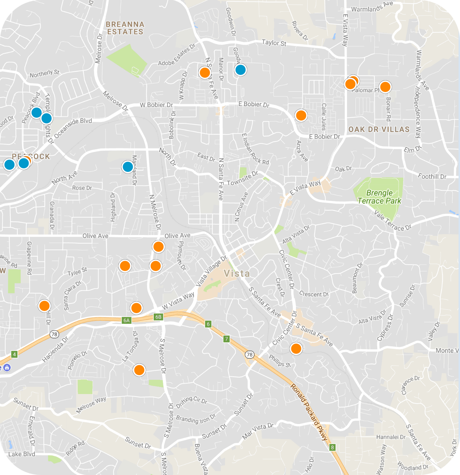 A large, northern suburban city in the San Diego area, Vista, California, is located about 40 miles north of downtown San Diego and about seven miles inland from the sea. The community incorporated in 1963 and has a total area of more than 18 square miles. In 2010, it was estimated to be home to a population of just under 100,000.

Vista is home to a large business park with more than 800 companies, and many residents throughout the region find employment within the area. In 2009 its top employers were the Vista Unified School District, Watkins Manufacturing, Co., San Diego Superior Court, Unitrin Direct Auto Insurance, DJO, Semco, Pennysaver, the city of Vista, Zodia Pool Care and Dimension One Spas, all of which employ more than 350 workers. Median annual household income was estimated in 2005 by the San Diego Association of Governments to be just over $60,500.

Public schools in the area are part of the Vista Unified School District, which oversees 18 elementary schools, six middle schools and seven high schools. There is also an alternative high school and the Guajome Park Academy charter school for middle and high school aged children that is partially funded through the district. Vista has branch campuses of both Biola University and Kaplan College for higher educational pursuits.

Attractions in Vista include the Moonlight Amphitheatre, an open-air theater specializing in musicals, and the Avo Playhouse. The city's two largest parks are Brengle Terrace Park and Guajome County Park, the former of which houses the amphitheatre. The city operates the Wave Waterpark from spring to fall in the downtown area, as well as the Vista Community Sports Park. Visitors can learn more about agricultural equipment at the Antique Gas and Steam Engine Museum. The community is also home to one of only two Buddhist temples in the state as well as a Japanese American Cultural Center.