San Diego Home Sales website search offers all Tierrasanta homes, condos and foreclosures for sale. You are able to get new property listings daily that meet your search criteria. 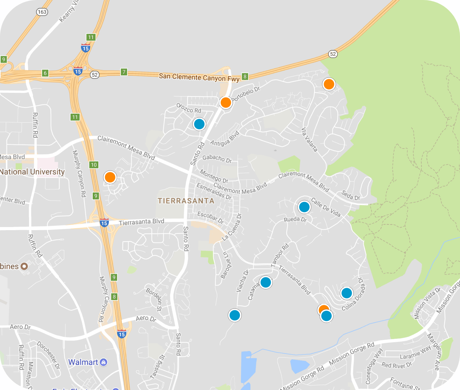 Tierrasanta is a community in the city of San Diego that lies about 12 miles north of the city's downtown area, just off Interstate 15. It is not surrounded directly by any other large communities but is rather bordered the north by the large Marine Corps Air Station Miramar and to the northeast and east by the large Mission Trails Regional Park, which includes Lake Murray. The west is bounded by I-15, and the south, finally, by large canyons that overlook the San Diego River and Mission Valley.

Tierrasanta takes its name from the Spanish words that mean "holy land," as the community was part of the Mission San Diego de Alcalá ranch during the 18th and 19th centuries. The land was purchased by the U.S. military in 1941, but it no longer needed it after World War II and sold the land back to the city of San Diego.

The community's center is the Tierrasanta Recreation Center, which features lighted sports fields, a swimming pool, tennis courts, a gymnasium and meeting rooms, and many residents take advantage of the neighborhood's location by going for jogs, walks or hikes on the numerous trails.  Tierrasanta also has its own branch of the San Diego Public Library. The Kaiser Permanente Medical Center is only one or two miles away on I-15 in Del Cerro.

Children in Tierrasanta are located in the San Diego Unified School District. The only school physically located in the community is Serra High School, and children attend elementary and middle school in nearby San Diego neighborhoods. The neighborhood has three shopping centers and a research park, as well as two small community parks, the Roadrunner Park and Tierrasanta Park, which is also the site of the recreation center.