Clairemont is a thriving community that developed during the post-World War II housing boom that today it is home to more than 81,000 residents. Clairemont’s unique character is defined by both its neighborhoods and its natural resources. With three of the City’s open space parks in or near Clairemont, city life can be quickly left behind for the more serene experience of canyon hikes, wildlife and beautiful beaches. 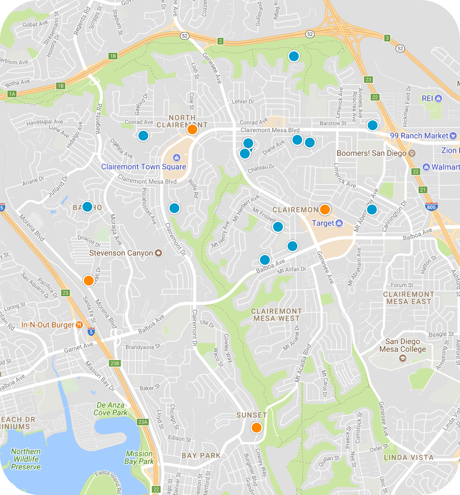 San Diego Home Sales website search offers all Clairemont homes, condos and foreclosures for sale. You are able to get new property listings daily that meet your search criteria.

A suburban community in the city of San Diego, Clairemont, California, is a smaller but vibrant community bounded by State Route 52 to the north, Linda Vista to the south, Interstate 805 to the east and Interstate 5 to the west. Clairemont was first developed in the 1950s, and it took its name after the wife of one of the developers, Marjorie Claire. Residents began moving in en masse in the 1950s, after World War II, at which time it was San Diego's largest suburb.

Clairemont sits about eight miles due north of downtown San Diego, and is composed of the neighborhoods of North Clairemont, South Clairemont, Clairemont Mesa East and Clairemont Mesa West. The San Clemente Canyon and the Tecolote Canyon are the only pieces of land in the community that remain undeveloped today, as they were both officially designated as parks in the 1970s.

Children in Clairemont can attend the Child's Primary School or the Lindbergh/Schweitzer Elementary School, while older students can learn at Marston Junior High, the Health Sciences High and Middle College School, and Clairemont High School. The community is also home to the Islamic School of San Diego for Muslim students of all grades. Just a few miles from here are two competitive higher education institutions, the University of San Diego and the San Diego Mesa College.

Also nearby to Clairemont are the Mission Bay Golf Course and Mission Bay Park, which is the largest man-made water park in the country at more than 4,000 acres, with San Diego Sea World and 27 miles of shoreline. There are numerous other golf courses in and around the community, including the Sam Sneed All American Golf Course in Tecolote Canyon National Park. Numerous shopping centers abound, and the San Diego International Airport is just five miles south of Clairemont.