San Diego Home Sales website search offers all Point Loma homes, condos and foreclosures for sale. You are able to get new property listings daily that meet your search criteria. 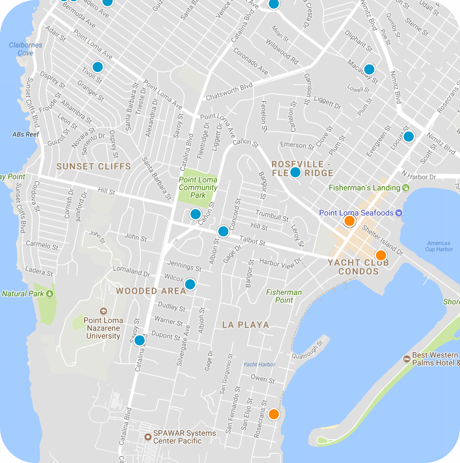 Point Loma is an oceanfront community in the city of San Diego, California, about 10 miles west across the waters from downtown San Diego. It sits on the edge of a jutting peninsula just south of the San Diego International Airport. The land on which it sits is mostly hilly and it is bordered to both the west, south and east by water. In 2008, the community was estimated to be home to a population of just under 50,000. Charles Lindbergh first tested and flew his Spirit of St. Louis airplane here.

The commercial area of Point Loma is called Point Loma Village and it is populated with stores, restaurants and businesses catering to yachters and fishers and is dotted with hundreds of jacaranda trees. Interstates 5 and 8 connect Point Loma to the rest of the parts of San Diego. There are several distinct neighborhoods within the community, including Liberty Station, a relatively new commercial district, Midway near the interstates, La Playa, the most expensive area for homes along the waters, Sunset Cliffs, Roseville and Loma Portal. The southernmost third of the peninsula is federally owned and includes the sites of the Naval Base Point Loma, the Fort Rosecrans National Cemetery and the Cabrillo National Monument.

Because the community is home to several military installations, it is no surprise that many of its residents are members of the military or civilian military employees. Military areas here include the Marine Corp's Recruit Training Depot and the Naval Base Point Loma, at which several submarines are maintained as is much of the telecommunications and electronic services for the Pacific Fleet of the U.S. military. At the southern tip is Fort Rosecrans, a location used during the world wars. The most well known icon in Point Loma is the Old Point Loma Lighthouse, which was constructed in 1854, which has been renovated and is open to the public.

Annually, Point Loma residents celebrate event like the Day at the Docks festival in April, the Festa do Espirito Santo, the Carillo festival in October and several Christmastime festivities. During the summers, musicians and other performers put on shows at the outdoor concert area on Shelter Island. The children living in Point Loma are served by schools in the San Diego Unified School District, which include here seven elementary schools, two middle schools and Point Loma High School as well a charter school campus one elementary school, two middle schools and five high schools. Colleges here include Point Loma Nazarene University and a campus of San Diego Community College.