San Diego Home Sales website search offers all North Park homes, condos and foreclosures for sale. You are able to get new property listings daily that meet your search criteria. 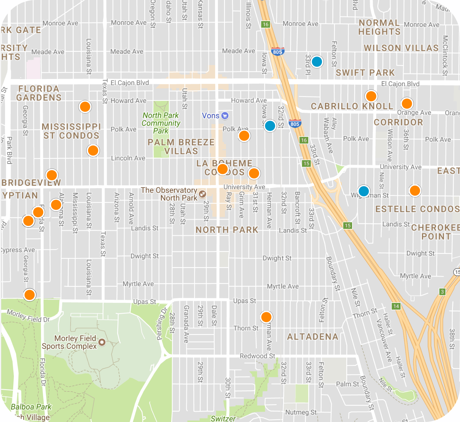 North Park is a neighborhood within the city of San Diego in Southern California. It lies just northeast of the city's downtown, only three miles from the heart of the city. It lies just east of the massive Balboa Park that is downtown San Diego, and it's just west of Interstate 805. Its boundaries include the canyons that oversee Mission Valley to the north, Switzer Canyon and the South Park neighborhood to the south, Interstate 805 and City Heights to the east, and Florida Canyon and Hillcrest to the west.

The community includes its own distinct neighborhoods of Burlingame, Altadena, and Morley Field. It was first settled in 1893 after being sold to a man who wanted to develop a lemon grove. Today it is mostly residential and commercial. There are seven major bus routes running through the community and connecting it with nearby destinations.

There are Bird Park summer concerts held for free in the summers, and other events include the San Diego Music Foundation's North Park Music Thing, a musical festival, as well as an annual holiday parade in December. It's also home to one of the area's best local farmers markets, held every Thursday. North Park is a trendy neighborhood with a variety of shops, restaurants and pubs, with its most famous area the Ray Street Arts District. It also is the site of the recently reopened Birch North Park Theatre, which is home to the Lyric Opera San Diego.