East Village is San Diego’s largest and most rapidly developing neighborhood. Boosted by plans surrounding Petco Park, development has skyrocketed in this district, the last to be developed by the city. Nearly 7,000 parking spaces; 1,056,900 square feet of retail space; 2,396 hotel rooms; and 2,429 residential units are planned for completion by 2006. Other projects include: Park at the Park, a picnic area and neighborhood park; East Village Square, a 500,000 square foot retail, entertainment and office development north of the ballpark; Campus at the Park, space for technology and office buildings on Park Boulevard; and the Park to Bay Link, a tree-lined promenade linking Balboa Park and San Diego Bay along Twelfth Avenue. Furthermore, four hotels, a new Main Library and numerous public improvements are planned. 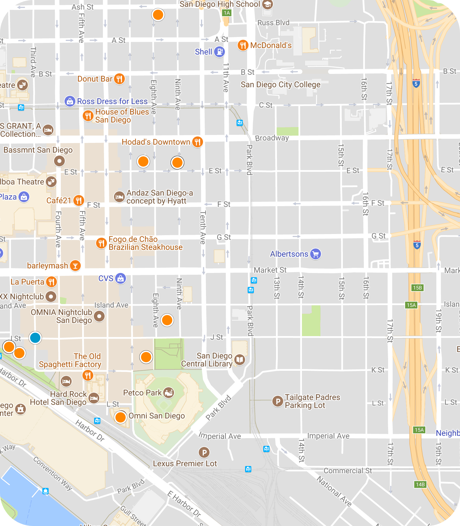 Schools, a central police station, commercial services and industry balance the residential land use. This center of modern urban development is also San Diego’s arts district, spotted with artists’ homes, studios, galleries and shops. There are many projects for beautification, rehabilitation, employment opportunities, and the development of East Village as an arts and entertainment center. Former warehouses and other old buildings have been transformed into charming residential lofts. The New School of Architecture, San Diego City College and two high schools augment this neighborhood’s youthful, creative population.