San Diego Home Sales website search offers all South County homes, condos and foreclosures for sale. You are able to get new property listings daily that meet your search criteria. 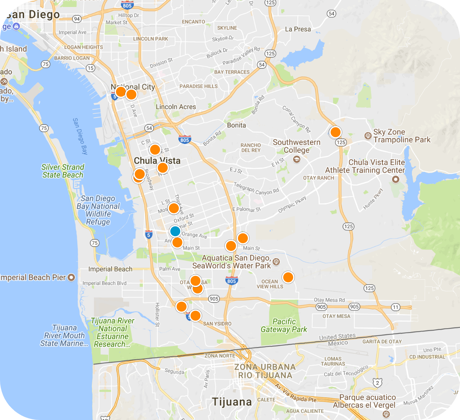 The area is San Diego referred to as "South County" is generally thought to include such communities as National City, Chula Vista, San Ysidro, Imperial Beach, Otay Mesa and Coronado as well as  the unincorporated communities of Bonita, Spring Valley, San Ysidro and Tijiuana River Valley. The three main cities—National City, Chula Vista and Imperial Beach—are together often referred to as the South Bay Communities. As its name implies, the areas are in southern San Diego County, and Imperial Beach is the furthest southwestern city in all of the U.S. mainland.

The area has a number of attractions for both visitors and locals alike to enjoy. Because of its fortuitous location near the coast, there are many quality public beaches nearby. Other attractions include Chula Vista Soak City water park, the Coors Amphitheatre, a 20,000-seat arena that is the largest concert venue in the San Diego region, the OnStage Playhouse, a nonprofit community theater in Chula Vista, and two large parks, Border Field State Park and the Tijuana River National Estuarine Research Reserve. National City is home to a well-established auto association with 21 franchises, and Chula Vista is home to one of the U.S.'s three Olympic Training Centers for professional American athletes. The U.S.-Mexico border can also be accessed from this area.

Listing courtesy of A Plus Properties