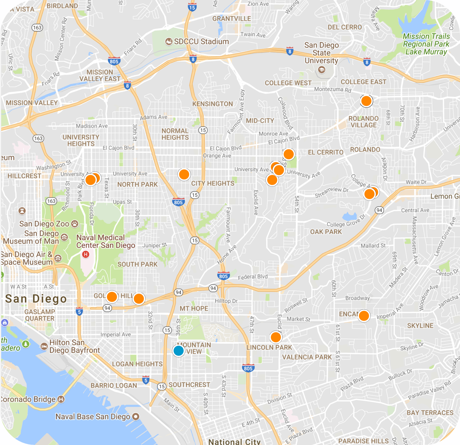 Central San Diego refers to the central part of the city of San Diego, located in Southern California, near the U.S. border with Mexico, and along the shores of the Pacific in San Diego County. The area referred to as Central San Diego is generally thought to include such communities as Clairemont, Del Cerro, Kensington, Mission Hills, Mission Valley, North Park, San Carlos, Sorrento Mesa, Talmadge and Tierrasanta.

Most of Central San Diego's communities are small communities -- both in population and in area size. The area stretches along some of the mountains and canyons that lie just east of the Pacific shores here in Southern California. All the public K-12 schools in these communities are part of the San Diego Unified School District, though there are also several private schools such as the Islamic School of San Diego.

In or nearby Central San Diego are attractions like the Mission Bay Golf Course and Mission Bay Park, which is the largest man-made water park in the country at more than 4,000 acres, with San Diego Sea World and 27 miles of shoreline,  Lake Murray and the Lake Murray Park, Qualcomm Stadium, home to San Diego's NFL team, the Chargers,  Old Town San Diego State Historic Park and Cowles Mountain, the site of the highest peak within the San Diego city limits as well as countless smaller community parks and numerous golf courses.

Schools in the area include the University of California San Diego, National University, San Diego Mesa College and San Diego State University. There are several area hospitals such as the Kaiser Permanente Medical Center, the Sharp Memorial Hospital, Alvarado Hospital and Promise Hospital of San Diego. The area is near to the Marine Corps Air Station Miramar.