Point Loma is an oceanfront community in the city of San Diego, California, about 10 miles west across the waters from downtown San Diego. It sits on the edge of a jutting peninsula just south of the San Diego International Airport. The land on which it sits is mostly hilly and it is bordered to both the west, south and east by water. In 2008, the community was estimated to be home to a population of just under 50,000. Charles Lindbergh first tested and flew his Spirit of St. Louis airplane here.

The commercial area of Point Loma is called Point Loma Village and it is populated with stores, restaurants and businesses catering to yachters and fishers and is dotted with hundreds of jacaranda trees. Interstates 5 and 8 connect Point Loma to the rest of the parts of San Diego. There are several distinct neighborhoods within the community, including Liberty Station, a relatively new commercial district, Midway near the interstates, La Playa, the most expensive area for homes along the waters, Sunset Cliffs, Roseville and Loma Portal. The southernmost third of the peninsula is federally owned and includes the sites of the Naval Base Point Loma, the Fort Rosecrans National Cemetery and the Cabrillo National Monument.

Because the community is home to several military installations, it is no surprise that many of its residents are members of the military or civilian military employees. Military areas here include the Marine Corp's Recruit Training Depot and the Naval Base Point Loma, at which several submarines are maintained as is much of the telecommunications and electronic services for the Pacific Fleet of the U.S. military. At the southern tip is Fort Rosecrans, a location used during the world wars. The most well known icon in Point Loma is the Old Point Loma Lighthouse, which was constructed in 1854, which has been renovated and is open to the public.

Annually, Point Loma residents celebrate event like the Day at the Docks festival in April, the Festa do Espirito Santo, the Carillo festival in October and several Christmastime festivities. During the summers, musicians and other performers put on shows at the outdoor concert area on Shelter Island. The children living in Point Loma are served by schools in the San Diego Unified School District, which include here seven elementary schools, two middle schools and Point Loma High School as well a charter school campus one elementary school, two middle schools and five high schools. Colleges here include Point Loma Nazarene University and a campus of San Diego Community College.

Our website features the best Point Loma real estate search for homes, condo, land and foreclosure properties available. It is the only site you will ever need! It is easy-to-use and updated by the official REALTOR®’s database every 15 minutes.

You can save searches, and get daily email alerts of new listings, price changes, sold data, and market reports. Our Interactive Map Search allows you to view properties on a map or refine your search by drawing the boundaries around the area you desire.

Curious about what’s happening in the Point Loma real estate market? Sign up for a  Point Loma Real Estate Market Report to see what’s active, under contract, and sold!

$529,000
1 Beds ⋅ 1 Baths ⋅ 230000314 MLS ⋅ ACTIVE Status ⋅ Brittany Hill BLDG.
Mint townhome remodeled at the end of 2022!!! New (as of 12/22): paint, flooring, fixtures, Whirlpool Kitchen appliances, AC, tile, dual-pane windows and even 2 parking spaces that are tandem. Gas fireplace. Your own laundry room with Samsung appliances! Heater and Fireplace believed to be original. Filtered water spout in kitchen sink. Show anytime! Perfect for getting a foot into the Primary or Investment Real Estate Market. Close to all. Loma Alta subdivision. Low HOA. No one above or below you!

$1,649,000
3 Beds ⋅ 2 Baths ⋅ 230000298 MLS ⋅ ACTIVE Status
Just appraised for $1.750m! Stunning coastal mid century ranch in the heart of Point Loma on quiet cul-de-sac! Upon entering your renovated retreat, you are immediately greeted by exquisite finishes and an open, flowing floor plan. Entertain your friends and family in your newly reimagined, gorgeous chef's kitchen, and then wind down in your primary bedroom with an abundance of natural light and dramatic hexagon accent tile wall in the master bath. Cozy up in your private backyard next to the sunken fire pit all year long! Close to Liberty Station, the beach, the Harbor, concert venues, restaurants, shopping and more. Live the ultimate coastal lifestyle!

$2,475,000
4 Beds ⋅ 3 Baths ⋅ 230000021 MLS ⋅ ACTIVE Status
Upon entry you will be captivated by this beautifully maintained warm and loving home. Tastefully upgraded to embody timeless aesthetics and charm. Open concept with a flexible floor plan which perfectly integrates multiple living areas. Huge panoramic views of the downtown skyline and mountains from the entire second story. Enjoy the ultimate backyard paradise with the expansive outdoor kitchen island featuring a state of the art Memphis grill. Custom built wood burning fireplace is the ideal space to cozy up and entertain. Relax and unwind in the salt water hot tub while watching movies on the projector screen. Perfectly located just steps from PL Community Park featuring tennis courts, PLLL, and summer concerts.

$1,200,000
3 Beds ⋅ 2 Baths ⋅ 220025142 MLS ⋅ ACTIVE Status
Reduced Price! Located in sought after Point Loma location. Presented for the first time in over 48 years this lovingly maintained 3 bedroom 1 and 1/2 bathroom single level cottage style home offers a great layout with many desirable features; large light and bright living room, delightfully large kitchen dining room combo accented with wainscoting, rubbed bronze chandelier in dining area which opens through sliding patio doors to outdoor patio great for entertaining. Separate laundry room is conveniently located in kitchen and has ample cabinets for storage. Large closets in two of the bedrooms (wall to wall closet and a walk in closet). Detached oversized two car garage adjoining an alleyway that can work as a separate entrance would be ideal to convert to an ADU for extra income, the potential to also include area next to garage was for parking, or open it up for space to entertain. Private backyard has plenty of room for dog, a garden and features an impressively large stag horn fern named 'Charlie'.The property is situated on a low pass through street with plenty of on street parking. In Point Loma’s coveted school district. Minutes to Beaches, Bay, Shelter Island, & Downtown.

This information is deemed reliable but not guaranteed. You should rely on this information only to decide whether or not to further investigate a particular property. BEFORE MAKING ANY OTHER DECISION, YOU SHOULD PERSONALLY INVESTIGATE THE FACTS (e.g. square footage and lot size) with the assistance of an appropriate professional. You may use this information only to identify properties you may be interested in investigating further. All uses except for personal, non-commercial use in accordance with the foregoing purpose are prohibited. Redistribution or copying of this information, any photographs or video tours is strictly prohibited. This information is derived from the Internet Data Exchange (IDX) service provided by San Diego MLS®. Displayed property listings may be held by a brokerage firm other than the broker and/or agent responsible for this display. The information and any photographs and video tours and the compilation from which they are derived is protected by copyright. Compilation © 2023 San Diego MLS®, 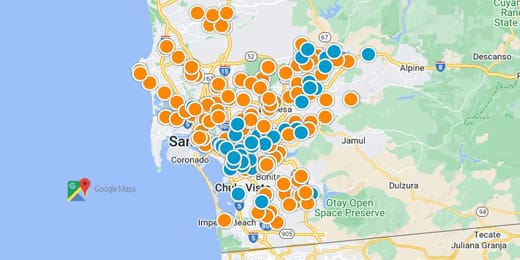