The Historical Setting of La Jolla Condos For Sale 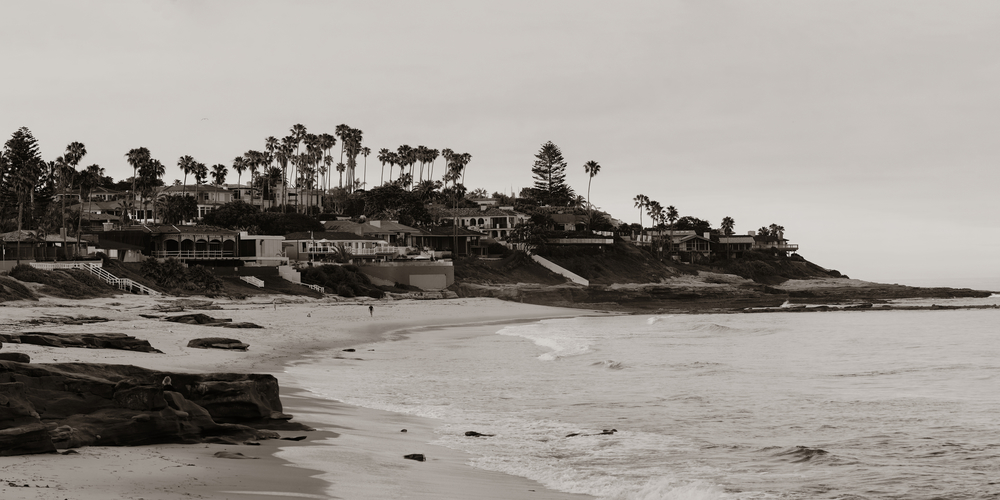 La Jolla is a beautiful community, well-known beyond California. It’s difficult to say what aspect of La Jolla life makes its name more justified (La Jolla means “jewel” in Spanish). The seven miles of coastline feature sandy and rocky beaches with amazing views; the city has a thriving cultural scene, with many art galleries and a famous theater; there are many boutique restaurants to dine; the city is also an education center, with the University of California, San Diego campus, the Salk Institute, Scripps Institution of Oceanography and many renowned schools which are part of San Diego’s Unified School District. If you are looking at La Jolla condos for sale (or houses), you may be interested to know how this city of captivating beauty evolved.

The start of the modern settlement

La Jolla became incorporated into the Chartered City of San Diego in 1850, but it wasn’t until 1869 that permanent settlers came. The first permanent settlers were the Sizer brothers. They each bought lots in the today’s area between Fay Street and La Jolla Boulevard for $1.25 per acre! They probably never imagined that their property would be worth $1.25 million per acre some 120 years later.

Even though the Sizer brothers were the first permanent settlers, they weren’t remembered as “the fathers of La Jolla”. This eminent title went to New York City stock broker Frank Terrill Botsford who purchased 400 acres of La Jolla Park in 1886. Botsford surveyed the area, subdivided it and auctioned it successfully in 1887, which came to be regarded as the founding year of La Jolla. The first house in La Jolla was built by another East Coast pioneer, G. W. Heald, who was also Botsford’s partner.

The perfect name of uncertain origin

La Jolla means a “jewel” in Spanish. This name is documented in land grant and mission records since 1928. However, there is scattered evidence of this name being in use as early as 1870.

It’s unclear whether the Spanish settlers to the area simply transcribed the native American name mat kulaaxuuy, which means “the land of holes”. Whatever the truth may be, La Jolla’s beauty and spirit merit the meaning of the name.

The late nineteenth century saw a steady boom for La Jolla, which came to be regarded as a perfect getaway. In the 1890’s the railroad extended to La Jolla and many resorts emerged. La Jolla Park Hotel was opened in 1983 and there were many bungalows for vacationers, as well as a summer tent city. The Union Congregational Church and La Jolla Woman’s Club were also established in this decade.

Three figures can be taken as most responsible for shaping the character of La Jolla. These are Ellen Browning Scripps, Eliza Virginia Scripps and Anna Held. Ellen Browning Scripps settled in La Jolla in 1896. She was a journalist and publisher and born into a wealthy family. Her brother E. W. Scripps started the Scripps Ranch. She pursued philanthropic causes, and her legacy is noted in the names of her many gifts to the community. These are Torrey Pines State Park, Ellen Browning Scripps Park, Scripps Institute of Oceanography, the La Jolla Woman's Club, the La Jolla Recreational Center, Scripps Memorial Hospital and Clinic, and the breakwater at Children's Pool beach.

Virginia Scripps was Ellen’s half-sister. She helped the efforts to build St. James By-the-Sea Episcopal Church. Her house was on the site of today’s Museum of Contemporary Art and she also bought Wisteria Cottage, currently home to La Jolla Historical Society.

Anna Held was a German immigrant who was a teacher, nanny and theatrical assistant. In 1897 she founded the Green Dragon Colony that gathered artists from all spheres – writers, painters, actors, etc.

As far as the appearance of La Jolla goes, a number of its most renowned buildings were designed by Irving Gill. He was San Diego’s most famous architect and a great number of his works have been registered as historical buildings in state and local registries.

The prosperity of the twentieth century

La Jolla went on to attract people looking for relaxation, artistic enjoyment and academic pursuit. The Scripps Institute of Oceanography was first built in 1909 and later became incorporated in University of California, San Diego. This was when the university opened in 1959.

The Grande Colonial Hotel which is situated in La Jolla Village was first built in 1913. It was such a runaway success that a second building was added soon thereafter. The building has undergone various renovations in the following decades, but the hotel still stands as a testimony to La Jolla’s history. Obviously, La Jolla’s miraculous beauty didn’t go unnoticed in Hollywood. Luxurious resorts attracted many A-listers and world celebrities.

The La Jolla Playhouse was founded in 1947 by Gregory Peck, Dorothy McGuire and Mel Ferrer. It had a break from 1959 to 1983. Today it comprises three theaters.

La Jolla today is a perfect place to live in Southern California. Whether you choose La Jolla condos for sale or La Jolla family homes, it’s quite possible that La Jolla will make your dreams come true. With a unique flavor of urban life and nature expanse, living in La Jolla is sweet, regardless of the neighborhood. Read more about La Jolla today.

If you are interested in browsing La Jolla condos for sale, reach out to us today! Home Sales San Diego is a team of local-savvy realtors committed 100% to helping you find the property you want and need. Need assurances? Check out our aerial videos, Yelp reviews and our platform. And make that call now!

Posted in San Diego Coastal, San Diego Real Estate
no comments yet
Please enable Javascript to comment on this blog