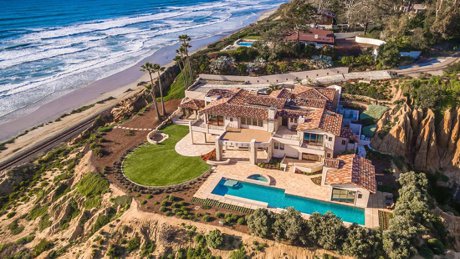 Take a look at San Diego’s biggest real estate sale of 2018 Let’s face it, the allure of living in San Diego is hardly the well-kept secret it once was. With beachfront properties among the finest in the world, San Diego has been known to draw in some of today’s biggest buyers. This past year, one home on the coast of Del Mar shattered a record that had gone unbroken for over a decade. We’re here to give you an inside look at the property and break down the details of this landmark real estate deal.

Built on 1.1 acres of beachfront property, 100 Stratford was the crown jewel of Del Mar’s real estate market in 2018. Listed originally at $29 million, this home raised a lot of eyebrows in the industry when it came to market. After being brought down to $24.5 million it sold for $21.5 million in early 2018, making it the first home to sell for over $20 million in over a decade.

If you’re anything like us, you’re probably wondering who could have scored this dream mansion. While this estate was originally built for an activist investor by the name David Batchelder, the keys just passed into the hands of John and Sally Hood. John Hood is the Chief Executive of Impact Biomedicines, a San Diego-based giant in one of our cities fastest growing industries. Acquired by Celgene in early 2018 for around $7 billion, Impact Biomedicines has been making waves with its innovations in treating blood disease. Moral of the story: biotech brings in the big bucks.

Moving forward, join me on a walk through this beautiful estate. From the moment you cross the threshold through the front door and step onto the radiant heated walnut floors. As you walk into the kitchen, the walnut cabinetry complements the floors, and the views of the yard and the beach take your breath away before you even step outside. Out on the patio, the isolation of the 1.1-acre property leaves you with the overwhelming sense that you have the area all to yourself, from the bluffs to the beach. As you step back inside, an elevator takes you up to the second floor where you can explore the 6 bedrooms and 7.5 bathrooms at your own leisure. From the master bedroom you step into the walk-in closet and realize you could probably park a small car in there.

Homes as extravagant as this are rare, even in the coveted coastal neighborhoods of Del Mar. Who knows, maybe this record-breaking sale will help catalyze some more monumental sales in 2019!  What do you think?  Leave your comments below.

Amazing looking place. Wonder if there will be a larger sale in 2019? Thanks for sharing.